It’s time once again to pack my bags and break out the passport, because I’m off to South Korea.
While I’m spending the holidays away from home, I’m not necessarily spending it away from family. I’ll be visiting my wife’s family and attending my sister-in-law’s wedding. Also, since this is my first visit to South Korea, I’m pretty much obligated to meet her entire extended family (kinda like the 8th rule of Fight Club). It’s not that I don’t want to meet the family, it’s just that I have to make a good first impression with so many people… so the pressure is on. Also, did I mention that I’m going to be the only white guy (in a hanbok) at the wedding?
Let me illustrate the situation using professional actor(s): 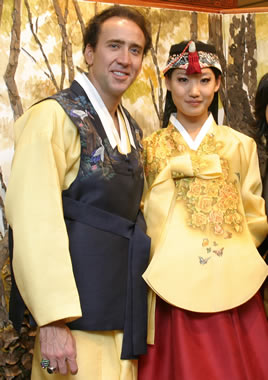 Yes, he stole the Declaration of Independence, but he also stole our hearts. I can only hope to do the same while in Korea (the part with the hearts).